This month, the children and I focused on the delights of spring, specifically on the life cycle of plants and rainy weather. We engaged in projects that reflected the changes we were seeing outside. The green flush of new grass and leaves and the emergence of lovely spring flowers were the subjects of our artwork, and we played matching and sequencing games that used flowers and plants to teach colors and the plant life cycle.

Our April circle time revolved around the changeable weather in April. Our favorite circle time rhyme went like this:

Went sailing about the sky. (move hands back and forth)

And they began to cry. (bring fists up to eyes to mimic crying)

And said "Oh never mind, my dears, (move head side to side)

To kiss away all your tears." (touch fingertips to cheeks to "kiss")

One of our first art projects involved doing some freeform watercolor paintings with various hues of green. The children were free to brush on and mix the colors as they wanted.

Once the green paintings were dry, the children finished their "gardens" by adding splashes of other colors, naming the colors they wanted to use. A few tiny final touches from me and our "gardens" were ready to hang on the wall!

The children practiced their scissors skills and developed hand strength and coordination as they cut out pictures of flowers from a seed catalog.

The children then used a glue stick and pasted on their flowers to make a colorful garden collage.

As we predicted, the April weather was changeable and so we spent some mornings indoors. The children had fun creating imaginative scenarios with blocks, animals, and people.

They also had lots of fun playing traditional listening games like "Ring Around the Rosy" and "Simon Says."

Another of our indoor activities included working on proper writing grip and fine motor control. The children used a dry erase marker to trace and complete April-themed pictures of an umbrella, a flower, a raincloud, and a watering can, and some shapes. They did a great job!

When we weren't forced indoors, the children and I had lots of fun outdoors. We played games of catch and games of tag.

The children used some boards to make a structure that was a bridge, a slide, and a balance beam. They also enjoyed lots of time in the sandbox building roads, houses, garages, and castles, sifting, scooping and dumping, and cooking in the mud kitchen. Each of these activities contribute to the children's body awareness and through sensory input allows them to learn about where their bodies are in space and how their bodies can interact with their environment.

Even the littlest Blue Sky Daycare child enjoyed her time outside. She loved feeling the grass with her hands, practiced her fine motor skills as she plucked stems of grass, loved feeling the sand in her hands, and learned a little bit about scooping and dumping sand in the sandbox. She also began to experiment with moving across uneven ground as she crept here and there following her friends. 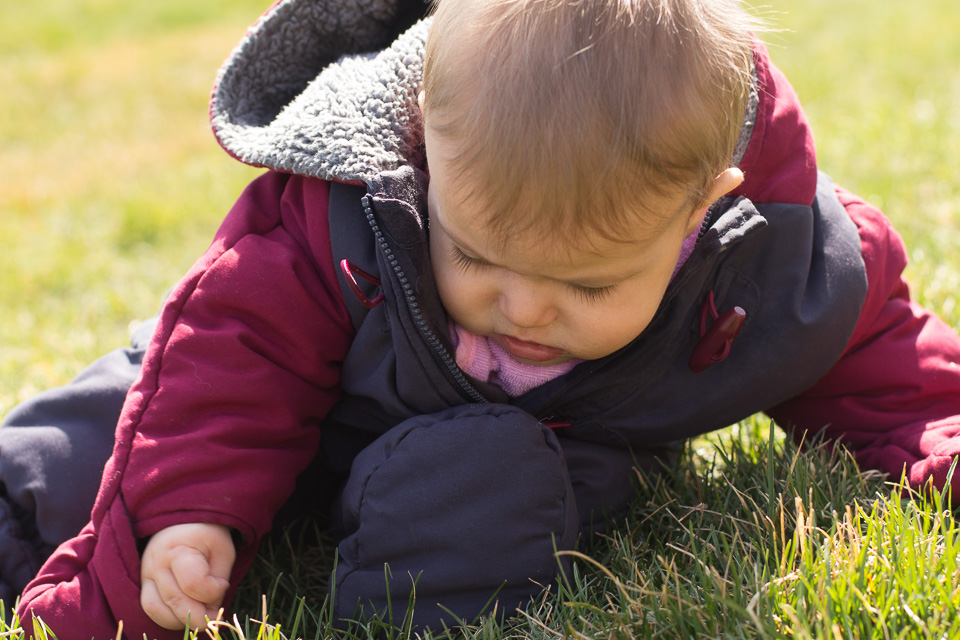 The nicer days lent themselves to nature walks. The children loved exploring found items in a field nearby. There was so much to look at and talk about! Nature walks are a great way to engage the children in discussions and develop their verbal skills as they describe their thoughts. I love to ask the children leading questions like "what do you think this does?" or "why can't you pick this up?" or "where do you think this goes?"

While outside, the older children noticed that some of nature's creatures are beginning to come out- most notably and observably bugs and worms. Three of the children gathered in a group to be "bug hunters" and found lots of bugs- butterflies, ladybugs, and ants. We observed the creatures and talked about being respectful and letting them do their "bug jobs." We also found worms! Some of the children were delighted to hold the worms and let them wiggle in their hands. This was a great opportunity for the children to learn about being gentle with animals and treating them with respect.

Perhaps our biggest outdoor adventure of the month was our Earth Day cleanup. We were using a circle time rhyme to practice picking up trash and putting it in a trash bag, so the children were familiar with the concept of spying trash. The children took on the role of "trash spotters" as we traveled through our neighborhood and nearby woods. I used "special" gloves to pick up the trash and brought along a large garbage bag. The children were truly excited to point out trash from the tiniest paper shreds to large items like styrofoam blocks and empty plant pots. Working together, the children and I stuffed the garbage bag almost to bursting. The children were so proud of themselves and if you look at the photos below, you can see that they truly made a difference!

Before our cleanup efforts:

We even had some time to ride a pretend "horse" in the woods!

One of the Blue Sky Daycare children celebrated a birthday this month, so we shared chocolate frosted cupcakes and sang a rousing round of "Happy Birthday" before the birthday child blew out the candle.

On one of the last nice days in April, we made it to the park and enjoyed lots of outdoor time. We met another child and his mother at the park, so it was a fantastic opportunity to practice social skills. The children played very well together chasing butterflies, taking turns in the sandbox, and pretending together.

Of course, there was plenty of gross motor involvement as the children jumped, climbed, rode, wiggled, and ran around the park.

Even the littlest Blue Sky Daycare child got lots of vestibular input as she rode back and forth in the swing. She was all smiles!

April was filled with so many learning opportunities for the children, and I'm excited to show them what is lined up for next month!

October is for little monsters!